Posted by Mike Ramsey at 4:15 AM No comments:

The egocentric motion management system (ECMMS) is both a model for agent movement and an application of a behavioral theory. Any game that features agents (e.g., animals, soldiers, or tanks) that move around in a 3D scene has a need for an agent movement solution. A typical movement solution provides mechanisms that allow for an agent to move through a scene, avoiding geometry, all the while executing some sort of behavior. This article discusses not only how focusing on the agent drives the immediate interactions with the environment but also, more importantly, that by gathering some information about the environment during locomotion, we gain the ability to generate spatial semantics for use by the agent’s behavior system. Portions of the ECMMS were used in a cross-platform game entitled World of Zoo (WOZ). WOZ is an animal simulator that requires various zoo animals to move through their environments in an incredibly compelling manner while the  players constantly alter the environment. So the proving ground for this system was in an environment that could be changed around the agents at any particular moment. In addition to detailing ECMMS I also discuss how to build a unified behavioral model that utilizes technology from all three of my character movement articles.

An Egocentric Motion Management System - Theory and an Implementation
Posted by Mike Ramsey at 4:15 AM No comments:

In this note I'll be discussing how biasing an entities starting position before providing it to the pathfinder, can improve the qualitative behavior of your game's characters. This technique was used on a multi-platform game [Ramsey 2009a].

Generating a route to destination can be parametrized in many ways, but one of the most fundamental parameters has a trickle down effect attune to an avalanche with observable repercussions on an entities motion - if selected incorrectly.

What I'm suggesting is that the start position provided to the path finder is one of the most important parameters to get correct. It almost seems intuitive to suggest that the starting point is "where your at." Well, maybe not so - we need to think temporally. Consider not only our thoughts, but our movement - it's always changing, adapting and what's appropriate at this moment in time is not necessarily appropriate 5 seconds from now, probably not even one second in the future. This applies to selecting a starting position for our animating penguin. We are more interested where it'll be rather then where it's at currently.

The picture below illustrates a simple environment where we have a penguin that wants to move from position A to position B. A typical pathfinder would be supplied with the penguins current position as the start position, and position B as the end point. The problem with this seemingly correct solution is that it fails to factor in any forward momentum of the penguin. Whether the forward momentum is implicit in the animation driving the penguin or an associated movement rate of a simple sprite where the penguin is at (t) is not where it'll be at (t+1). 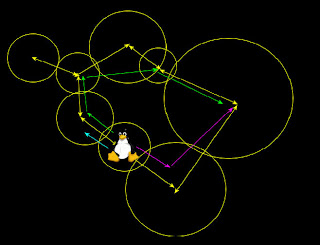 Depending on how fast the penguin is moving, we bias the start position of the penguin farther and farther away. A simple technique is to attain the penguins heading and magnitude of translation over one frame (t). And then using a standard unit of measurement (r) - I used the diameter of the penguin, you multiply (r*t) = (s). I also experimented with the radius and this worked as well for animals that didn't translate too fast. (s) then becomes a scale that we can apply to the penguins directional vector, with a resulting point in the environment that serves as the starting point for your path finding algorithm. Straightforward and it allows for the continuation of the penguins motion with out any jarring hitches caused by the pathfinder (I had coded up a modified version of A-Star that supported our modeling methods) .

This technique is not only useful in this directed graph representation, but also on typical grids and navigation meshes. I hope you find it useful as using this technique had a qualitatively positive impact on the movement of the animals in World of Zoo.

Further Reading
1. “On the Nature of Things” Lucretius, translated by Ronald Melville is wonderful book expounding the atomic theory first presented by Epicurus. Book I covers the two principles of beingness: that nothing ever came from nothing and that nothing ever returns to nothing. Book 2 discusses the principles of continual motion and how collisions shape the free will. Book 3 covers the nature of the mind, while Book 4 explains the nature of vision, hearing, taste, smell and how aspects of the environment enter the mind. Book 5 and 6 wrap covering mortality and environmental effects.
Posted by Mike Ramsey at 3:10 PM No comments:

While the last post attempted to cover the more concrete canon, this post will list the books that comprise my Noumena philosophical canon. Every project needs an underlying set of principles that help guide the development of not only the final product, but arguably the process in which these systems were built. These books represent some of the core books that provided ideas that contributed to Noumena's process.

1.  The Complete Works of Aristotle, ed. Jonathan Barnes
2.  The Human Touch, Michael Fray
3.  Michel De Montaigne The Complete Works, Translated by Donald Frame
4.  The Phenomenom of Life, Alexander
5.  On the Nature of Things, Lucretius
6.  Being and Time, Heidegger
7.  The World of Perception, Merleau Ponty
8.  Experience and Prediction, Hans Reichenbach
9.  The Phenomenology of Perception, Merlau Ponty
10. The Origins of Knowledge and Imagination, Jacob Bronowski
Posted by Mike Ramsey at 7:52 PM No comments:

It's been a while since I posted, so here are a few of the books that I consider canon for the development of Noumena. There are literally hundreds of other books that have influenced Noumena in some form or another (I actually posted several years ago an initial list of some of the books) but these few here are the pillars on which a number of my ideas are based upon.

Hopefully in the not too distant future, I'll be posting an outline for the manuscript entitled, "Fellow Creatures: A Referential Intelligence." It's a book that covers the development of the referentially based cognitive engine, Noumena.